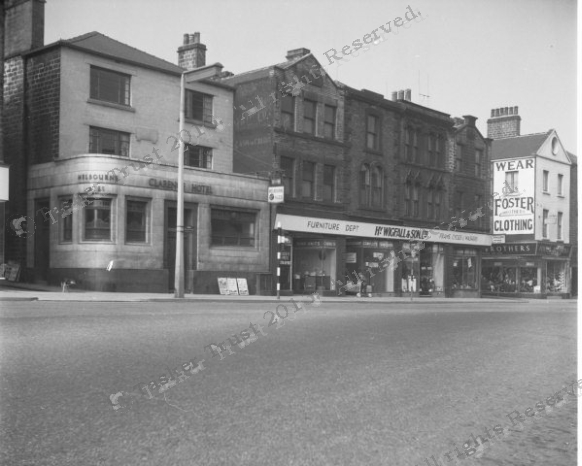 Henry Wigfall & Sons furniture and electrical emporium on this site, at 19-23, continues to be well remembered by many people with Barnsley associations. The extensive frontage was set in old Victorian/Edwardian buildings, right next to the Clarence Hotel (probably named after the Duke of Clarence, grandson of Queen Victoria, who died during the influenza epidemic in 1892), and across from Fosters. The Foster business had established itself here from the 1920s, extending the frontage over the years. The Barnsley Furnishing Company were previous occupants, their signage still just visible at the gable of the Wigfall building. The Clarence Hotel, with its stone and tiled facade was established around 1850, the publican in 1960 being Harry Waite who had been there since 1942, the Waite family of publicans having been resident from 1908, a considerable achievment. The Clarence was an early HQ of of Barnsley Football Club. It was demolished in 1974.