Pictured at work in the Archives section of the Library. 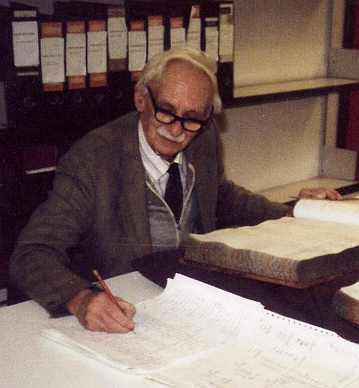 Ted Tasker was born in Lincolnshire in 1910. He served in the Second World War as a radiographer and was mentioned in dispatches. After the war, in 1948, he opened a photographic shop in New Street, Barnsley. As a keen photographer he specialised in natural history and medieval church art.

In the 1960’s, when the major redevelopment of Barnsley town centre was proposed, he began to record the buildings of Barnsley for posterity. This led him to research the occupancies of the properties over the previous 100 years. By the 1970’s he had created a collection of over 1800 photographs of Barnsley streets and buildings.

These were published, together with details of the properties, in a 9 volume series entitled “Barnsley Streets”. They were republished in 4 volumes by the Tasker Trust in 2002 and are still available. The books represent a fascinating socio-economic history of the town.