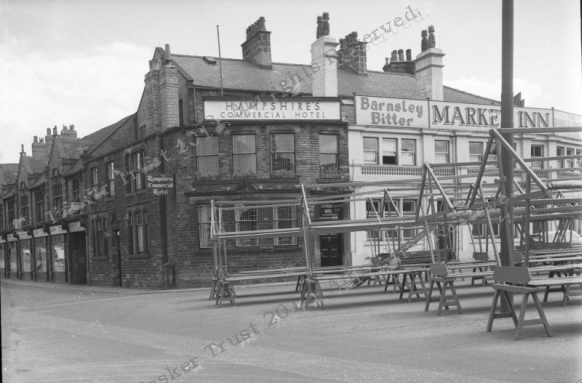 Ideally placed for trade on market (and other days!), the Market Inn dated back to the 1830s and was extant right up to the redevelopment of the late 1960s, its last landlord being John William Holdsworth. Next to it, a little more sombre, was the Commercial Hotel (Hampshire's), previously kept by Mr Tinker who was in charge of a temperate establishment i.e. one that did not serve intoxicating liquor, in keeping with the Temperance Movement that swept through mid and late Victorian Britain. Despite limitations, it had a subscribing membership. 'Tinker's' was the place where Barnsley's co-operative pioneeers once met, William Tinker being the first treasurer. See E.G.Tasker's Barnsley Streets vol 4, p58-59.