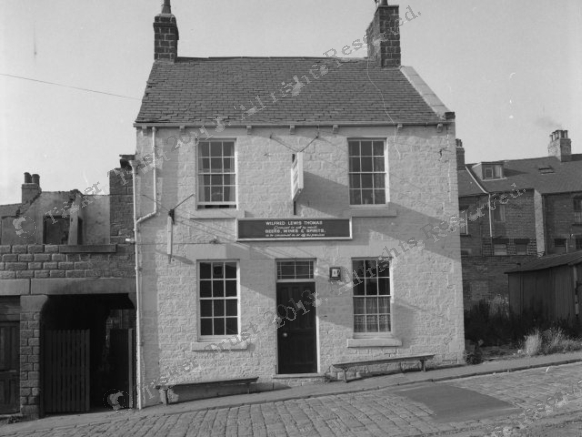 Front view of the Moulder's Arms, a small public house located off Summer Lane, East side. This photograph dates from 1973 about a year after this establishment ceased trading, its last publican being Wilfred Thomas. Plain-fronted but white-painted stone facade, the pub was presumably named as such because of its location to the iron foundary nearby.The Moulders had four sash windows of a simple design and a plain central entrance. Occupancy of the building has been traced by Ted Tasker to 1854, probably the time of its origin. Also in the same street was the Fitter's Arms, another engineer-related pub name. The Moulder's was a 'Clarkson Brewery' house for many years, as can be seen by its sign. The benches by the front are interesting, where folk could have a drink and a rest, the slope up to the top of the hill a not inconsiderable one.